We caught up with Bronte Tadman, who plays Sonia Brownell in our current touring production Red Skies. Bronte joined the team this year, and like many of the cast, this is her first Eastern Angles show.

Tell us about your roles in Red Skies.

I play not one, not two, but seven characters in Red Skies! When I’m not playing the inspiring and formidable Sonia Brownell, George Orwell’s second wife, I’m embodying various women and girls from Orwell’s past. I also pop up as Nancy Blackett!

You were also in a show that closed last March – tell us about that?

Before the pandemic hit I was in a production of Ben Hur at the Barn Theatre. It was a farce and great fun to be a part of. We were very lucky to be able to open and perform it for a week or so, before the theatres went dark. It’s been well over a year since any of us were on stage or in rehearsals for a production, it feels very strange and yet wonderful at the same time.

What was it like being back in a rehearsal room after so long?

Being in rehearsals was lovely, mainly because everyone at Eastern Angles is so friendly. However, every now and then I did panic that I’d forgotten how to be an actor or even a sociable human!

You’ve performed Red Skies at five different venues so far...how are you finding the tour?

The tour is going really well so far.  I was worried that building the set might be tiring but it’s so cleverly designed that it’s actually really satisfying job to do and gets us all well acquainted to the new space at the same time. I’m also discovering all these beautiful towns and villages that I never new existed!

In terms of performing the show it’s been great fun. Any feelings of apprehension (about being in a room full of people after many months and if I remembered how to perform!) fell away within the opening few seconds of the first night. I’m excited to see more lovely venues and see what they bring to the show. 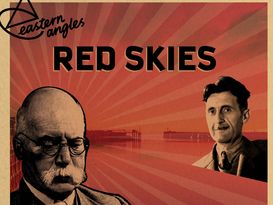 What would've happened if George Orwell and Arthur Ransome had met? Find out as Red Skies returns...