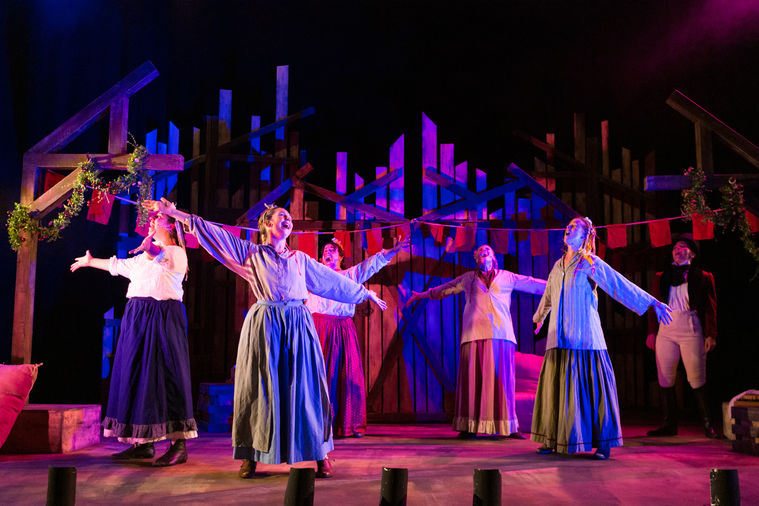 Today is International Women’s Day. TheBallad of Maria Marten is also opening tonight at Exeter Northcott, before we welcome the show back ‘home’ to Ipswich next week - see here

In developing the original production (then called Polstead)  we worked with an incredible group of women who have all survived domestic abuse. Their insight helped the creative team, and especially Beth,  understand Maria’s story, her journey. It was as a result of those sessions that Beth took the decision not to include the character of William Corder at all.

‘I didn’t need to give him a voice. I wanted to focus on who Maria was” Beth says.

Thanks to support from Arts Council England and Colchester BID, and as The Ballad of Maria Marten toured the UK, Beth returned to work with two new group of women, one in Colchester with Next Chapter and one in Ipswich with Lighthouse.

So this International Womens Day we are proud to share two new booklets of poetry and prose that have come from those workshops alongside the writing of the original Lighthouse Women.  All the contributors are survivors of domestic abuse and the raw and powerful poetry and prose they contain are very much part of their life stories.

Their words reminded us that one of the reasons we know Maria’s story is through the folk song (The Suffolk Tragedy / The Murder of Maria Marten). That songs origins were as Broadside Ballad – sold on street corners by Ballad sellers who would often fit the words to a tune they already knew or made up on the spot.

So we set six contemporary singer songwriters a Broadside Challenge. We gave them the words you can read in the booklet and asked them to set them to music, to create as it were new broadside ballads. Today we are delighted to release the first four of those Broadside Challenges:-

Dark is the Path by Lisa Knapp. Dark is the Path uses a typical narrative ballad format with repeating refrains. It quotes a number of different verses from the womens writing and all the other lyrics are diffused mixture of the stories rather than verbatim lines. Lisa released her own version of The Murder of Maria Marten in 2018

Survivor uses one of the poems in The Next Chapter booklet by Beth Nash.  Beth plays Theresa Matthews in Ballad of Maria Marten http://www.bethannash.co.uk/

Lighthouse Women uses words from across the project and is set to music by Bristol based performer, composer and musician Victoria Bourne. https://www.victoriabourne.com/

He was a Kind and Good Natured Young Man uses a poem from the work of the original Lighthouse women, and is set to music by actor Susie Barrett, who actually says those lines in the play!

We’ll be releasing a further 2 tracks when Ballad of Maria Marten returns to Ipswich.

Ahead of the show opening at the New Wolsey Theatre we have released a further track for the Broadside Challenge. Stronger Than I Look is performed by Jess Dives who performs as character Phoebe Stowe in the stage show. Listen

Don't miss the show as it performs on Suffolk soil between Thursday 17 - Saturday 19 March! Grab your ticket to the show at New Wolsey Theatre HERE